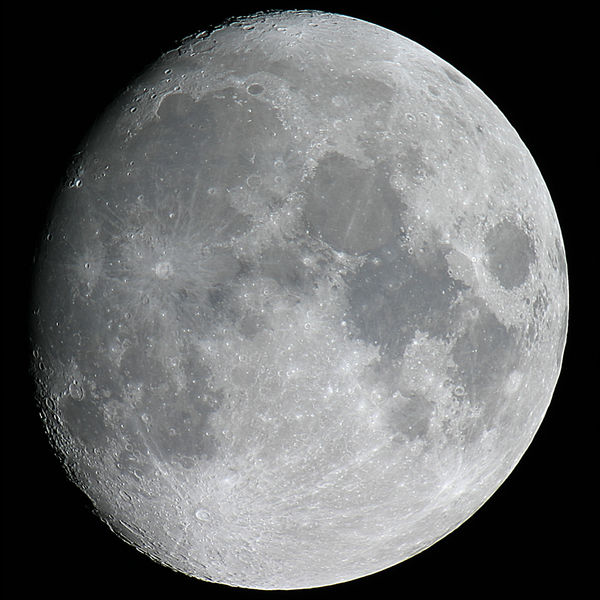 Image of the Moon, obtained from this wikipedia page here on 30 December 2006. Apparently it was created by the wikipedian user Mdf


The Moon is the Earth's natural satellite and, easily visible much of the night for a major part of each month, has been known since ancient times, when the Moon was regularly used for determining calendars. The name "month" is based on the word for "moon", since the Moon takes about a month to complete its cycle of phases. The modern calendar used in most the Western world now, has months of fixed numbers of days and takes no account of the lunar cycle.

The time taken for a complete lunar cycle of phases, is on average,

This is the time between one New Moon and the next New Moon, or one Full Moon and the next Full Moon. The Moon rotates on its axis in the same time it takes to complete a revolution round the Earth. So a complete "day" on the Moon (noon to noon, or midnight to midnight), is also 29 (Earth) days, 12h, 44m, 2.8s.

During the course of one month, the Earth-Moon system has gone a considerable amount round the sun, so that the line of sight between this system and the sun has changed by almost one twelth of a revolution. The time for the Moon to complete a revolution round the Earth (and also to rotate on its axis) using a "true" coordinate system based on the direction of the distant stars (the siderial period or revolution) is significantly less, at

It should be noted that these periods are only an average. Due to the influence of other bodies in the solar system, especially the sun, and to a much lesser extent the planets, the movement of the Moon is complex. If the sun were not there, then the siderial period of revolution of the Moon round the Earth (at the same distance from the Earth), would be slightly but noticably shorter.

Once consequence of the Moon revolving on its axis in the same time it takes to complete a revolution round the Earth is that only one side of the Moon can ever be seen from Earth. The other side was completely unknown until the Russian spacecraft Luna 3 took photos of it in 1959.

The Moon goes around the Earth in an ellipse, with the consequence that its angular speed of revolution round the Earth is greater when it is at its closest point than at its furthest. Its angular speed of revolution on its axis is constant however. In addition, its axis of rotation is inclined somewhat to the plane of its orbit round the Earth. The Moon appears therefore to wobble slightly to and fro on its axis as seen from the Earth, both east and west, and north and south. An observer on the Moon would see the Earth wobble about its mean position in the sky. Thus there are regions around the limb of the Moon which can sometimes be seen from Earth but not at other times. These are known as the libration zones. (This is nothing to do with regions of the Moon not being visible from Earth at times, simply because they are in darkness.) One famous feature within the libration zone is Mare Orientalis. It is just possible from Earth, at favourable times, to get a glimpse of some parts of this feature; however, photographs taken from spacecraft have shown it as a large bullseye, with concentric rings of mountains around it.

The Moon's surface is pockmarked with craters from impacts sustained over its lifetime, and since the Moon has no significant atmosphere to weather away early features, these remain until obliterated by subsequent action. Many impacts created enormous basins, sometimes causing cracks in the Moon's crust which has allowed moltern magma to well up from the mantle either at the time or subsequently, and thus create lava plains, which are known as maria, since they were at one time believed to be oceans. The Moon is not the same all over; over 30% of the near side is occupied by maria, compared with 2% of the far side. One of the reasons for this is that by and large, the crust is substantially thicker on the farside than on the nearside, so impact basins are much less likely to fill with lava. The maria on the Moon's nearside are more concentrated on the northern hemisphere than the southern. The Moon's centre of mass is marginally (possibly 1 to 2 miles) closer to the earth than its centre of figure.

The Moon's maria are somewhat darker than the "highlands" around them, as the material has a different mineral content (more iron). The maria are younger than the highlands, and so less pockmarked with subsequent impact craters.

The largest and deepest basin on the Moon is the South-Pole–Aitken Basin on the lunar farside. This basin is believed to be the oldest impact basin on the Moon, and it also one of the largest impact features known in the Solar System. It extends from the Lunar South Pole (where the outer rim can sometimes be seen from Earth on the Moon's southern limb), to the crater Aitken in the north.

The Lunar south pole of rotation itself is in a crater called Shackleton (either just inside, on on the crater's rim). Some craters at the lunar poles never receive any sunlight inside, and are therefore in permanent shadow. The Moon's equator is only inclined about 1.5 degrees to the eclipic (the Earth-Moon system's orbit round the Sun), so seasons on the Moon are minimal. (By contrast the Earth's equator is inclined 23 and a half degrees from the ecliptic.) The Moon's equator is inclined six and a half degrees to the plane of the Moon's orbit round the Earth.

The Moon's apparent diameter as seen from the Earth is about the same as that of the Sun. When the Moon passes in front of the Sun we get a solar eclipse. Because of differences in the Moon's apparent diameter due to it's varying distance from us (and to a lesser extent, differences in the Sun's apparent diameter), it is possible to have total eclipses, in which the Moon completely covers the Sun; or annular eclipses, in which the Moon is too small to cover the Sun completely, one then seeing a "ring" of Sun showing around the Moon. A total or annular eclipse can only be observed from a narrow zone on the Earth's surface. Partial eclipses can be observed over a wider zone, however. Direct observation of a solar eclipse without adequate precautions carries risk of serious eye damage.

When the Earth is between the Sun and Moon, its shadow darkens the Moon's surface, and we get a lunar eclipse. Lunar eclipses, unlike solar eclipses, can be viewed over any part of the Earth from the Moon would otherwise be visible. Because the Earth's atmosphere bends the Sun's rays, the Moon is rarely darkened completely during a lunar eclipse.

The Moon has about a quarter of the Earth's diameter, and is about 81 times less massive. The two bodies revolve about their common centre of gravity, called the barycentre. This barycentre is actually inside the Earth, below its surface.

The Moon, and to a lesser extent the Sun, is responsible for the tides we get on Earth.

Man has so far landed on the Moon on a total of 6 separate occasions, Apollo 11 to Apollo 17, which the exception of Apollo 13 which developed a fault on the outward journey, and had to return to Earth without a Moon landing. Apollo 11's lunar module landed on the Moon in July 1969.

The Moon has now been extensively photographed and mapped by orbiting spacecraft, including in the 1990s by the Clementine and Lunar Prospector missions.