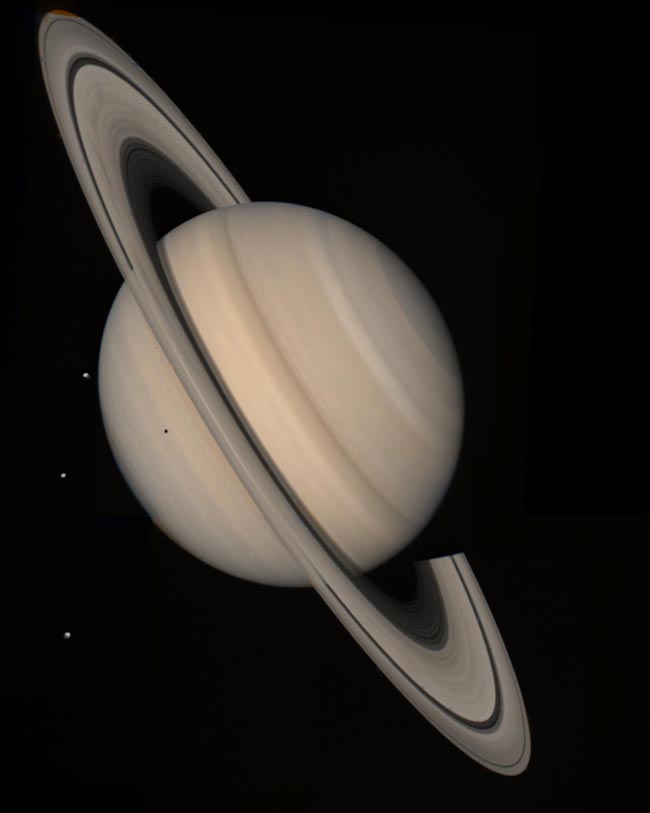 Saturn is possibly most famous for its distinctive ring system, often visible even through smallish telescopes. In 1610 Galileo saw the rings, but, unable to discern them as such, wrote to the Duke of Tuscany that Saturn was actually triple. In 1655 Huygens, using a better telescope than Galileo's discerned that Saturn was surrounded by a ring.

Saturn is the only planet in the solor sysems whose average density (0.6873 g/cm3) is less than that of water (at Earth's sea level). Thus, with a gigantic stretch of imagination, one might visualise this giant planet actually floating on an even more gigantic sea of water! Of course it wouldn't work like that really.

Like the other giant planets Jupiter, Uranus and Neptune, Saturn does not have a discernible solid "surface", except possibly deep down at the core. For the purpose of defining the planet's density and other characteristics, is is conventional to define the "surface" somewhat arbitarily as the atmospheric level where the pressure is one bar - which is approximately the atmospheric pressure at sea level on Earth.

Like the other giants, Saturn rotates rapidly; like Jupiter it takes less than 12 hours to rotate once on its axis. Saturn is the planet with the greatest polar flattening, the polar diameter being almost ten percent less than the equatorial diameter. Saturn's surface gravity (using the above definition of "surface") is approximately the same as the Earth's, being somewhat greater at the poles, somewhat less at the equator. Uranus's surface gravity is a bit less, at less than 90 percent of the earth's. Neptune has a higher gravity, of 1.14g. Jupiter is the only planet to have a gravity much greater than the Earth - almost two and a half times as much.

The Saturn system has more recently been visited by the Cassini probe, which was launched from Earth on 15 October 1997. The Cassini took on board a DVD with 616,420 scanned autograph signatures, from people around the Earth. 10 copies of the DVD were made, one actually being sent, one being at the JPL, and eight in museums.

The Cassini mission ended almost 20 years later with a deliberate plunge into Saturn's atmosphere on 15 September 2017.

Cassini carried with it a module designed to land on Saturn's moon Titan. This module, Huygens, separated from the Cassini probe on 25 December 2004, and was landed by parachute onto Titan on 14 January 2005.

Scientists currently believe that the Solar System formed by the collapse of a nebula. This is the so-called "nebula hypothesis", first proposed by Immanuel Kant and Pierre-Simon Laplace in the 18th century, and periodically revised since.

Basically, the gas cloud collapsed to form the proto-sun in the centre, surrounded by a disk of gas and dust. As the sun developed, the dust in the disk accreted to form panetisimals, which then, partly through the influence of their own gravity, coalesced to form planets. In the inner, warmer part of the system, volatile substances such as water and methane, could not condense, so only rocky material formed into the planets; further out, beyond the "frost line", large amounts of water ice and other volatile substances could condense out, so the planets formed were bigger, and could then by their gravity start capturing gas such as helium and hydrogen from the disk - thus forming giant planets. Later the young Sun went through a brief period known as the T-Tauri phase, during which it developed an extremely prolific solar wind, which blew away much of the remaining gas and dust from the disk.

Until the last couple of decades or so, it was generally believed that the planets formed, essentially, at or close to their current positions; this is no longer believed to be the case. There may have been at least five inner solar system objects, one of which colided with the earth in an event that led to the formation of the Moon. The existance of massive bodies, e.g. Jupiter, can affect where in the inner solar sytem a body may potentially accrete and exist in a stable orbit.

Existence of significant amounts of material in the disk even after planets have formed, may affect the orbits of these planets. Planets, by their gravity, produce density variations in the surrounding disk material which result in migration of the planet's orbit. In the close regions at least, the net effect may be that the planet migrates inwards towards its parent star, comparatively rapidly in the case of a terrestrial-mass planet, somewhat less rapidly in the case of a Jupiter-size planet. The final state would of course, be dependent on the amount of gas and dust still present in the disk, and at what stage it was blown away by the star. The presense of other planets in the system might affect both the rate and the direction of migration.

It is now believed that Uranus and Neptune did not originally form as far out from the Sun as they now are.

In 2005 a group of scientists published some papers establishing the "Nice Model" (since then revised), arguing for an initially more-compact solar system. Beyond the gas giants in the Solar System are belts of numerous small object known as the Kuiper Belt. The outer giants probably deflected Kuiper Belt objects inwards towards the Sun, with the result that these giants gradually moved outwards. Jupiter may have ejected some objects out into far orbits, or even out of the Solar Sytstem altogether, and itself have migraged inwards from its original position. Jupiter and Saturn passing through a phase when their orbital periods were in a 2:1 ratio, so that they always passed each other at the same point, would have various effects, including on the orbits of Uranus and Neptune. (Some numerical simulations suggest a 50/50 chance that Uranus and Neptune swapped places while migrating outwards.) The gas giants deflecting objects into the inner Solar System could have contributed greatly to what is known as the period of heavy bombardment on the inner planets, and on the Moon. It may also have contributed to the presence of water on Earth.

Astronomers have in recent years found indications of massive (e.g. Jovian mass) planets in very close orbits around their parent star, in some cases much closer than Mercury orbits the Sun, such that their orbital period may be only a few days in length. Since current belief in how planets form suggests that planets this mass could not form so close, these "Hot Jupiters" therefore must probably be gas-giants which formed further out and then migrated inwards to their present position.

Now exoplanets have been discovered that are not "Hot Jupiters". However, whilst there are plenty of planets quite far out from their star (not all of them gas giants) and there are some in what are believed to be "potentially habitable" zones around their star, it appears that many planetary systems are rather-more compact than our own. There are also some systems in which the planets seem to follow highly-eccentric orbits around their star. Our own system could well be rather unusual in its ortibal layouts.