In the field of astronomy one often hears about telescopes.  It is, however, perhaps rather less frequent in this context to hear about the eye itself

The eye is the optical instrument that most of us are endowed with all our lives, from birth to the grave.  Only a minority of people own, or could even afford, a large astronomical telescope; but the majority of us, in whatever society we live, possess eyes.  Optical telescopes have been around for only a few hundred years, yet the field of astronomy and observations was known to ancient people in many parts of the world.  The Babylonians could predict eclipses; the five naked-eye planets were well known to ancient peoples, and there are ancient records of such things as novae, to name just a few examples.  Copernicus never possessed a telescope.  The Supernova of 1054 which gave birth to the Crab Nebula is well recorded, as are the one in Cassiopeia in 1572, known as Tycho's star, and the one in Ophiucus in 1604, known as Kepler's star - believed to have been observed only a short time before Galileo turned his telescopes to the sky and made his great discoveries.

I shall here attempt to give a brief look at the workings of the eye. 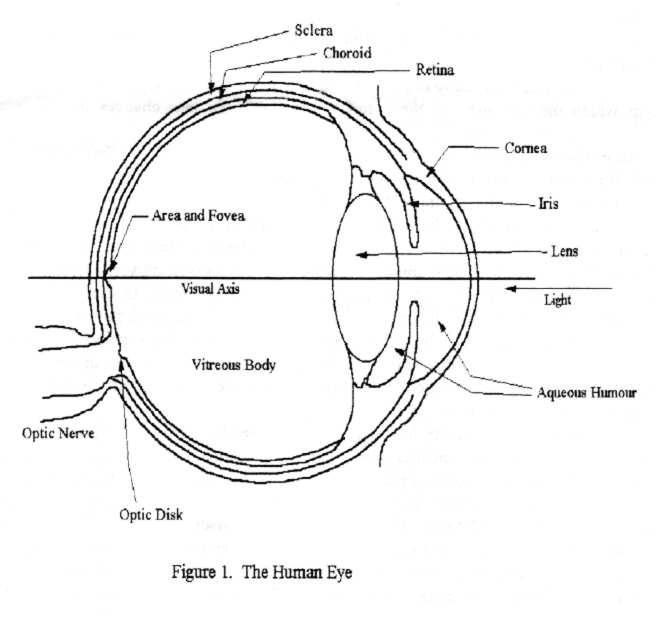 Figure 1 is a rough section of the human eye.  Optically, it works very like a camera or telescope..  The cornea and the lens combine to focus rays of light on the retina, which is the sensitive layer, converting light photons into electrical nerve signals, which are sent via the optic nerve to the visual parts of the brain.  The iris regulates the amount of light getting in, contracting the pupil in response to bright light and expanding it when the light is dim.  An iris which is heavily pigmented looks brown, whereas one which is less pigmented generally looks blue or grey.

In the normal human eye the cornea at the front possesses most of the focusing power, leaving only a relatively small part for the inner lens to play.  The latter, however, is believed to perform most of the change in focussing power necessary for focussing objects at differing distances onto the retina (by a process known as accommodation, in which the curvature of the anerior surces of the lens changes in response to muscular action).

In other creatures the structure of the eye often differs from the human eye, depending on the creature's habitat.  The cat, for example, has an eye specially developed to enable it to see in dim light.  In aquatic animals, e.g. fish, the cornea, being of almost the same refractive index as the surrounding water, does not contribute much towards the focussing of light onto the retina; and thus may be shaped so as to conform well with the general streamlining of the animal.  In these creatures the inner lens must perform virtually all the focussing; and the lens is often thick.  Some animals which do not rely too heavily on sight have eyes which are small and often flattened.  This way the eyes do not take up too much space in the head.  The cameleon is unusual in that it is believed to have an inner lens of negative power.  This may enable the animal to have a large retinal image and thus good visual acuity, without the very-long eyeball which would normally have to go with it.  This negative-powered inner lens acts in a similar manner to the telephoto lens of some cameras, or the negative-powered Barlow lens in some telescopes, so as effectively to increase the focal length of the objective without requiring an exceptionally long telescope tube to go with it. 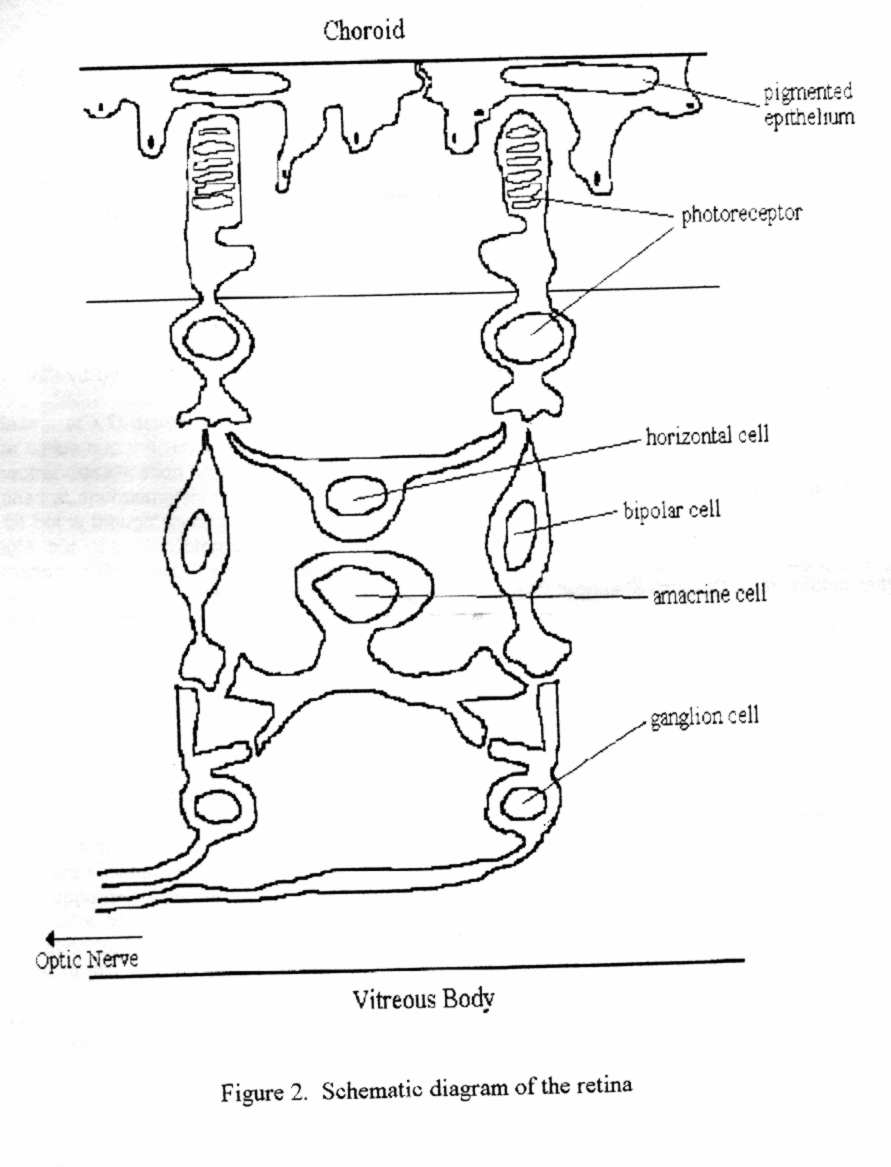 The retina itself is shown schematically in Figure 2.  There are basically two types of receptor cell, rods and cones.  The former react to low light levels and thus give sensitive night vision, whereas the latter give good visual accuity and colour vision where light conditions are more favourable.  The receptor cells respond to light by sending signals to bipolar cells, which in turn activate ganglion cells, signals then being sent along the optic nerve to the brain.  Horizontal cells and amacrine cells modify the signals in various ways, depending on the activity of adjacent receptors.  In good light, the signals sent along the optic nerve to the brain are believed in large measure to represent contrast rather than the state of illumination of each receptor cell taken in isolation.  This way, form vision is enhanced, by strong awareness of outlines.  Another thing that one generally tends to notice easily is changes in illumination, as well as movement of an image across the retina.

The rods and cones are by no means uniformly distributed on the human retina.  In and around the fovea (Figure 1) there are few or no rods (which is why one can sometimes see a very dim star more easily if one looks slightly away from it rather than directly at it).  The fovea is where cones are most densly populated, and where the photopic or daytime vision is at its most acute.  Away from the fovea cones become more scarse, and visual acuity more degraded; but rods become more numerous.  The total number of recepters (rods and cones) generally exceeds the number of fibres in the optic nerve which take the signal to the brain.

As with the optical adaptions of the eye, so the retina is not the same in all species.  Animals which live chiefly at night have retinas which consist chiefly of rods, whereas diurnal animals tend to have retinas with more cones.  Some creatures do not have notably good visual acuity, but never the less are able to detect motion easily.  Some birds seem to have one or more involutions or projections (called pectens) into the vitreous chamber of their eye.  Whilst it is not certain exactly what functions these serve, they may assist vision under certain circumstances by casting (moving) shadows on the retina.  Some animals, e.g. the cat, have reflective layers in their retinas, in the pigmented epithelium.  This is why a cat's eyes sometimes appear to glow in the dark.  It should be noted that, unlike the retinas of octopods (whose eyes are similar in many respects to ours), our retinas are inverted.  This means that the receptive layer of the retina is the layer nearest the outer coat of the eye, and light has to travel through the other retinal cells to get to it.  This, however, possibly assists in the nutrition of the recepters cells, which in warm-blooded creatures such as ourselves, are very energy-hungry.